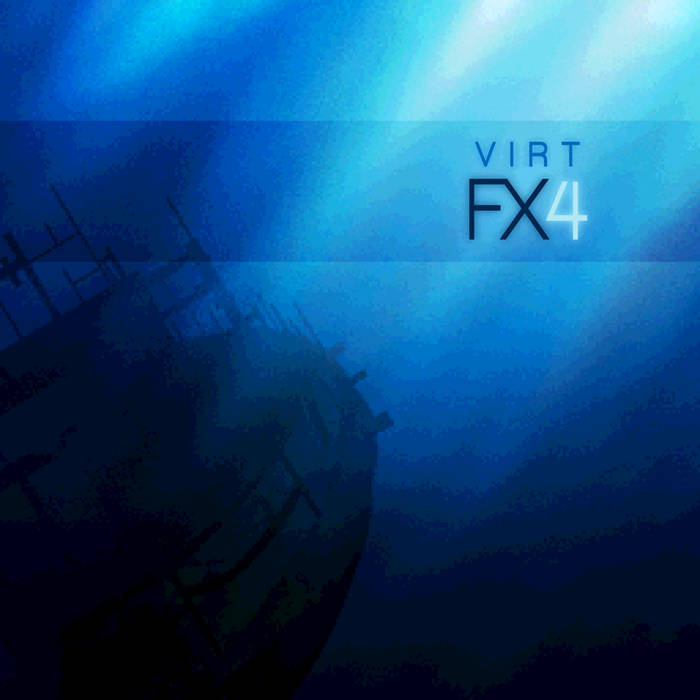 Dominic Arsenault Tabarnak, hostie que c'est bon... these are Quebecois swear words that sprang out of my mouth, roughly meaning "holy f***, this is so good" when I heard Incident Zero. This is Kaufman at his best.

aaronwriterguy This along with FX3 might get me into chiptune. Favorite track: Incident Zero.

FX4 is a concept album set in the oceans and skies. Its story immediately precedes that of FX3.

The album is free, and I am not expecting or asking for payment, although I appreciate donations -- the proceeds will go toward software I need for my one-man indie game project.

Unlike the previous albums, which were written as "soundalikes" using sampled chip sounds, FX4 consists of machine code that can run on a real NES system. It was written in Famitracker, available for free at famitracker.com.

If you don't have NES transfer hardware, the NSFs can be played using VirtuaNSF (virtuanes.s1.xrea.com/vnes_dl.php -- scroll to the bottom), or dozens of other players for PC, OS X, iPhone, Android, etc.

This album is for my brand new friend, Xander Pasquale Payongayong Napolitano, and his proud parents Jayson and Ann. May you have a long, happy life filled with all sorts of music and magic.

INCIDENT ZERO
Hundreds of years in the future, a great war is waged between two powerful nations. A navy carrier transporting a prototype super-weapon is caught in a surprise attack. The ship breaks apart and sinks, taking its precious cargo with it.


BELOW THE WAVES
A decade later, the war has ended, but scattered warlords still battle over territory and salvaged military technology. The sea floor is littered with sunken warships, and the warlords send salvage parties to take anything they can. They race against teams of independent researchers, who are determined to reach these weapons first so they can be sealed away. One such team is horrified to learn about the cargo which sank 10 years prior: A prototype aircraft, capable of creating small wormholes in space-time. The resulting waves of distortion could tear apart any nearby object and breach any fortification. The science team races to locate the wreckage deep in an oceanic trench, and orchestrates a recovery dive.


INTO THE RIFT
Despite the hazards of deep-sea exploration and growing diplomatic unease, the salvage operation begins. The surface team is protected by a small fleet of hired mercenaries. Hours into the dive, they are suddenly attacked by an unknown military force, far better equipped than any provincial warlord. The attackers suddenly retreat, however, as soon as the news breaks that the wreckage has been secured.


WEAPON
The scientists hold the prototype in a sealed vault until they are certain they can study it safely. Their mysterious rivals quickly reveal themselves to be a band of power-hungry naval loyalists. This rogue navy ambushes the vault, takes the science team hostage, and orders them to restore the vehicle immediately to working order.


RECONSTRUCT
The reconditioning is slow and difficult; the researchers are forced to piece together bits of information from military records, and the rogue navy is quickly losing patience. The scientists eventually finish restoring the prototype, and are then ordered to prepare it for a field test. The threat of such a powerful weapon, the navy believes, could easily bring the warlords under control, allowing the legitimate military forces to re-establish order and maintain a lasting peace.


FIRST FLIGHT
The craft takes to the skies, awe-inspiring and incredibly nimble. The crew calibrates the systems and tests the vehicle's performance, while several of the naval leaders ride along. The officers demand that the crew test the vehicle's time-space displacement functions on a warlord's stronghold, against the advice of the science team.


SINGULARITY
No sooner does the crew succeed in creating its first spatial anomaly than it grows rapidly out of their control. The vehicle, together with its crew, is pulled into an alternate reality, immediately drawing the attention of a devious -- and highly charismatic -- humanoid alien.


THE TIME VAMPIRE
After losing several crew members, they determine that this "vampire" sustains himself by absorbing energy created by the movement of living beings through time, essentially removing his prey from existence. Despite their attempts to escape, the vampire easily shoots them down over the ocean, using his own time machine, a stylishly retrofitted WWII fighter.


UNDONE
The few surviving crewmen reflect on the consequences of their ambition, as the icy waters swirl above their heads, and the shattered aircraft slips under the waves. The vampire, hungering for adventure and fresh-squeezed time juice, shifts over into our universe, only to find the world's combined military forces waiting for whatever might emerge. Thus begins the story of FX3.